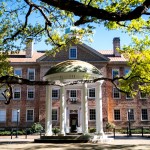 It’s been a while. More than a while. Eons, really, in web life, since I’ve posted. How does a wordsmith not write? Isn’t writing like breathing for a journo? Indeed it is. And I have, actually, been writing. However, in a dramatically different format.

A little explanation is clearly needed:

Since moving to Chapel Hill, North Carolina, I wrote for several local publications and continued to freelance for national ones. I had also been working on two books. Yet I was feeling unfulfilled. After all my years in the entertainment industry, I found myself itching for an alternative that would inspire me creatively and intellectually. Then, one day as I contemplated this while stopped at a red light on Columbia Street, I glanced to my right. The brick and beige buildings of The University of Chapel Hill beckoned and I felt an immediate connection. Academia! Higher education! Forward-thinking, educated peers with whom I can exchange vigorous dialogue! I raced home and began investigating job postings at UNC.

Discovering that the UNC LGBTQ Center was looking for someone who could write their newsletter and create an alumni publication, I immediately applied. Once the Director learned of my skills, I found myself a member of the Tar Heel family. For over three years, I helped support LGBTQ visibility as webmaster of our site, social media, printed flyers, a weekly newsletter and the Alumni publication. Stuck on what to call the latter (alumni is a male gendered reference and we wanted to be inclusive, but unique), I held a well-publicized contest for alumni to come up with the title. The winner got a basket of goodies donated by GAA, Carolina’s alumni association, plus bragging rights. The winning title was “Aluminate,” a clever convergence of “alumni” and “illuminate.” I quickly learned InDesign and found myself in writer’s heaven as I created, wrote, edited, designed and distributing the publication.

The small but effective team at the LGBTQ Center lived by the motto “Teamwork makes the dream work,” collaborating on numerous trainings, programs and initiatives for faculty, staff, students and Carolina community members. We worked hard, but laughed a lot. We joked that, in most offices, it is inappropriate to discuss sex, politics or religion, yet our purpose demanded that those topics were the focus of our conversations. As an ally, I felt empathy and compassion for our constituents. The troubling stories of students terrified of being homeless if their parents learned about their sexuality were something that I lost countless nights of sleep over. After working so many years in the entertainment industry, doing work that was socially relevant and literally saved lives was incredibly fulfilling. But with my skillset, I quickly outgrew the position and there was no room in the budgetarily constrained office for me to grow. It was time to look elsewhere.

Just around that time, I participated in a Diversity Training, held by a brilliant woman named Sharbari Dey, who worked in the University’s office of Diversity and Multicultural Affairs. This aligned with my social leanings and growing awareness. I wanted to be involved in this work. It would allow me to continue to support the work of the LGBTQ Center and other affinity centers across campus. In the meantime, I reached out to Sharbari to offer my skills if they were needed. Luck shined upon me when the Communications Specialist in Diversity and Multicultural Affairs announced her retirement. There is an expression in Hebrew called b’shert, or “meant to be.” It clearly was b’shert – my destiny – to land in this department. In November 2015, I took over the vacated position and have since been working tirelessly towards creating a Carolina that is inclusive for ALL.

The breadth of written coverage in this department – now known as the University Office for Diversity & Inclusion -  is like no other: rather than focus just on our programs and initiatives, my purpose is to amplify messaging from every other department/unit/school across Carolina that has to do with diversity, equity and inclusion. Features covered the spectrum of diversity, equity and inclusion issues. I write Diversity Spotlights about faculty, staff and students who have worked towards advancing diversity at UNC and beyond; features about my colleagues who have achieved success; memorial pieces about faculty who have died, especially those from minority groups who have achieved awareness of American Indian and other heritages; coverage of COVID-19′s impact on different populations, and more.

So, you see, I’ve been a busy little wordsmith. Telling the stories of people who have been invisible, othered, and micro-aggressed upon. It is incredibly rewarding to contribute to a better of understanding of each other through my writing. My hope is that my efforts help our society return to a positive trajectory towards empathy, acceptance and unity. It’s b’shert.